This paper describes synthetically the design, development and characterization of two wireless instrumented crutches for monitoring lower-limb rehabilitation activities. These sensorized crutches allow monitoring axial and shear forces and tilt angles in real time. Each crutch is composed of three strain-gauge bridges measuring axial and shear forces, a conditioning and transmission circuit, a tri-axial accelerometer and a battery power management circuit. The data are transmitted wirelessly via Bluetooth to a remote computer, no further readout unit is necessary.

The instrumented crutches have been tested and characterized using an ad-hoc experimental setup and they have been used for the first tests on one subject. This post shows, in a concise manner, the description of the system and the first experimental results on one crutch obtained in laboratory. © 2014 The Authors. Published by Elsevier Ltd.

In the literature, a few prototypes that allow you to assist in the rehabilitation activities are reported and some functions that therapists consider important are not implemented, such as the measurement of the shear forces due to the unbalance of the patient. Collaborations with therapists have allowed us to identify the main features of the sensors.

The axial and shear forces are measured by twelve strain gauge sensors integrated into each crutch and connected in bridge configurations, a dedicated low-power electronics allows to filter and amplify the signals. Each sensorized crutch is powered by one 9 V battery (1.2 Ah) permitting up to 24h monitoring. The preliminary results obtained testing each wireless instrumented crutch show a good accuracy of the sensors. 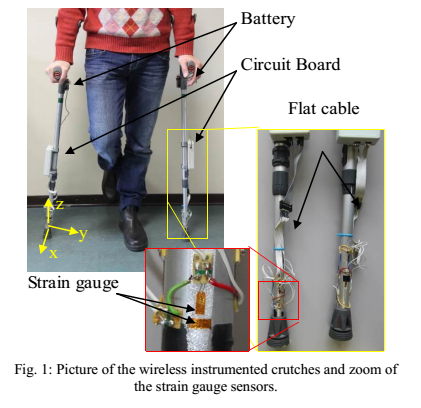